All dressed up Housebook style

This started out as a keen interest in the late 15th century German garb a couple of years ago, and I have made some tryouts aiming for a dress with the pleated panels in front and back as seen in so many drawings and paintings from the time and region. However, I struggled with how to get enough bust support with such a lowcut dress with the pleated panels and never found a good way of doing it. Until the first pictures of the Lengberg finds hit the internet, showing supportive underwear from just the right time and place! Here was the answer to all my garbquestions. No need to make the dress work supportive, it is all done by the under-garments. And since I lost a lot of weight and changed size, the need for making new garb got urgent and a friend then asked the trick question – When going new, will you focus on just one time and region and explore it completely? I raised to the challenge and this is the first results. The accessories are not all completely new but made by me within the last three-four years.

The aim is getting a complete and welldocumented outfit suitable for a merchants wife in one of the southern German towns of late 15th century, like Nürnberg where Albrecht Dürer resided.

In some details I have to refer to pure guesswork, where no good sources of preserved garments and/or good detailed artwork are to be found, but I then aim to do an educated guess, based on sources from other geographic regions than my chosen one, either actual finds or artwork.

My inspiration for the shift is a variety of paintings, mainly by Albrecht Dürer, showing both men and women wearing elaborate smocked and embroidered shirts/shifts, all showing in the deep V-necked kirtles or jackets. When examining them closely, you´ll find that it is most likely a very fine and tight smock with white-work embroidery covering the pleats and then a small ribbon or golden lace attached to the neckline. In most of Dürers female portraits the shift shows covering the shoulders and neck as well, but in his selfportrait it is clearly a different model, with a tight smocked frontpiece and the shoulders of the shirt not showing at all. In other depicitons of women the dress is always a deep V-neck but there the shift is only showing in the bottom of the V as a small insert. I have therefore chosen to make a simple shift with some more work done on the front panel, that will be the only thing showing. And after quite a lot of experimenting I had to give up the idea of actual whitework over the pleats. In some close-ups it looks like couched whitework and that is simply too much to chew on for me right now. So my shift, in a rather sturdy hemp that holds the pleats nicely, is inspired by Dürers shirt but not as elaborate. The embroidery is a simple smock done in golden and white silk. The cut is a simple one, a A-shaped backpiece, two frontside-panels, the inserted pleated frontpanel and arms with a square gusset. This cut seems to be in style, as far as style goes concerning undergarments, for centuries, shown in English 16th century fashion and in the early medieval days, shown in preserved garments like Thomas Becketts shirt or Infantin Marias shift from the 12th and 13th centuries. The shape of undergarments of course vary as they start to show, with wider arms if shown in slits or open and laced arms, but when not showing and worn under a tighter straight sleeve the arm of the undergarments is adjusted. I have therefore chosen a straight arm in my shift, not to tight so that I can push them up when needed and so that it is not too bulky under the straight arm of the dress. 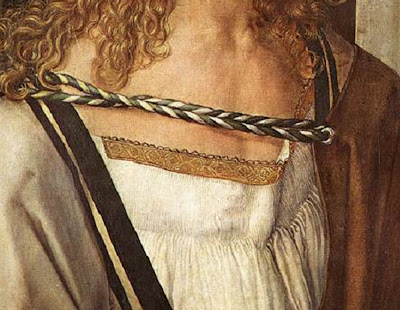 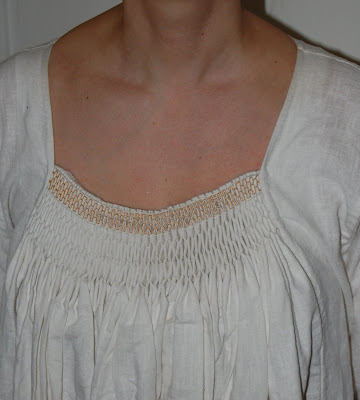 
I have long wanted to make what is popularly named “the Housebook dress”, after the numerous pictures done by an anonymous engraver and painter, who lived and worked in South Germany in the last quarter of the 15th century. 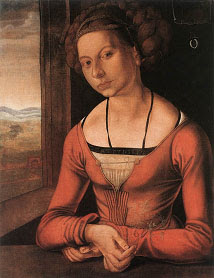 The three pictures above shows some of the variety of dresses in his and others artwork, but they all have the characteristics of a deep V-neckline showing the shift and pleated panels in the front. In the St Catherine-picture you clearly see the cut of the dress, with a waistseam, not showing in the pleated frontpanel, which was propably one whole without the waistseam. Most of the width in the skirt seems to come from the pleats and not from the sidepanels at all. In Dürers portrait of the young girl the same inserted pleats show in the front and the dress seems to be with a waistseam, however not that obvious. In this portrait it is also noticable that there must a front opening.

Others have made dresses like this before, one real inspiration has been Bettinas Pages but where she has chosen whole sidepanels I really feel that the fit of the dress improves by giving it a waistseam, and one can find both with and without waistseam in the artwork. Considering the back of the dress there are some depictions showing that there is an inserted pleated panel there as well, and that the arms are inserted deep into the bodice, similar to the “Grand Assiette” in for instance the Charles de Blois pourpoint or the Queen Margareta kirtle, both dated to the late 14th or early 15th century. I have sadly not found any source of a preserved garment with the Grande Assiette-sleeve from late 15th century, but there is plenty of examples in the artwork. The sleeves vary as well and I have chosen to make mine simple, a straight full length arm with some width for comfort and room to move, since I want this dress to be used for all occasions, not just for finery. Since I have chosen a good quality dark brown wool, I find that I do not have to reinforce the pleats or couch them in any way, so I have simply gathered the top of the panels in pleats using a strong thread(I tried silk with the first panel, not to be recommended since silk is way to slippery to make good and sturdy knots fastening the string before pulling the pleats together, so I turned to linen thread instead), and reinforced with some parallell seams across the pleats on the backside.


The bodice is fully lined in white linen and I have chosen to keep the lining in one piece covering the inserted pleated panels for extra strength and support. Another possible way to make the pleats would be sewing them one by one, like in on of the Herjolfsnes garments, and I might give that a try next time.


The front will be fastened together with hooks and eyes, similar to Bettinas dress, since I cannot see any other way of making it. A lace with small ringlets, as she suggests at first, might be a possible solution but hooks and eyes works best I think. There actually is a preserved linen lining from Lengberg, of what must be a girls dress, and it is sewn with coloured silk. It is mentioned that there is a metal hook still preserved in the bottom of the front V of this lining. However, there is not an actual opening, but this find shows that linen lining was used, as well as silk thread for sewing.

In many of the depictions a veil with pleats over the forehead is shown, often with the Gefrens covering the neck and with a long band/vimple either tied up around the chin or hanging loose over the shoulder. My headdress consists of a square linen veil, folded in tight little pleats in one end, stitched to stay in place, and of one narrow long piece to be used as the vimple, tied around the chin or simply wraped around the headdress and then left hanging loose at one side. There are even more elaborate headdresses, probably with some kind of upholstered ring on top of the head, similar to later times Wulsthaube. My veils can be used like that as well, using my Wulsthaube that I made some years ago. In some depicitons it is clear that the vimple is actually a part of the pleated veil, in others it seems to be a simple square veil with pleats simply snugged in at the neck.

The gefrens is a little fringe of wool yarn fastened to a ribbon to tie around the head under the veil. There are depictions of young women using only the gefrens over their braided hair and there seems to be a variety of colours, even multicoloured ones. Mine is simple green, and made by using the loose threads as weft into a woven ribbon using a rigged heddle.

Now for the last finishings. No attire is complete without these things, a belt, a purse and a pair of stockings.

The belt is the simplest belt ever, since I haven´t found any pictures of elaborate women belts in the artwork from this time and region, but simple, thin belts just enough for holding a purse. Black leather in a 1 cm wide strip, with a very simple brass buckle, sewn to the belt.

The purse is another story, I found these purses with a number of smaller purses attached to it, in drawings and etchings by Albrecht Dürer.

I made mine in a good quality dark blue wool in a foursplit pattern, and four smaller purses attached, one on each of the four pieces. I have used beads of bone and metal for fastening the lucet cords use for the purse, all made in green wool yarn. And around the opening I used a red lucet cord for reinforcment and adornement.

The stockings or kneehose are in the area of the educated guess. I have not found them in the artwork, nor in any preserved examples from this region. Kneehose have however been found among the Herjolfsnes garments, made in wool and with no whole foot, and a hose fragment has been found in Lubeck as well as one possible kneehigh hose from London. All these preserved examples are in wool, sewn and dated from late 13th century to 15th century. Sewn stockings are therefore my choice for keeping my feet warm.

My hose are sewn in a soft pink wool fabric, in three pieces, one leg, one covering the foot and a sole. Although most preserved hose are sewn without a separate cut sole, there are examples in artwork showing a sole, sometimes differing in colour, suggesting a reinforcing sole, maybe in leather.
And this is how it all looks:

Anna
A passionate dressmaker and amateur (in the true sence of the word) researcher of historical dress and accessories. Re-enactor and SCA-member. My main focus is German renaissance from 1450 to 1510, but I dabble in 14th Century and modern periods as well.